Just three months after the new food waste recycling service was rolled out to all 52,000 households in the district, residents are now sending just half the amount of rubbish to landfill that they used to and their recycling rate has nearly doubled. For the first time ever, the district’s residents are putting out more recycling than rubbish for landfill.

Whilst a full year of statistics won’t be available until later this year, the first three months have shown that the amount of rubbish sent to landfill has dropped to 114kg per person, per year – well beyond the target to reduce it to 228kg per person by 2020, set by the Gloucestershire County Council.

“Our citizens really have embraced the new service. We always knew that the district’s residents were keen on recycling and reducing waste and even though we expected the figures to improve significantly, we never imagined that they would be this good, this soon. These figures are a tremendously pleasant surprise and a great endorsement of everyone’s commitment to recycling. Within the first couple of weeks of the new service starting, our hard working crews on the ground anecdotally reported that 90 per cent of homes were already putting their food waste out for collection. These figures back that up as we are collecting over 500 tonnes of food waste a month.”

The food waste is sent to an anaerobic digester where it is recycled into gas and fertiliser. The 503 tonnes collected from the district’s residents each month is enough to heat nearly 200 homes and provides around 450 tonnes of fertiliser for farming.

The amount of waste going to landfill each month has dropped from 2,153 tonnes to 1,074. This means that within the first three months of starting to recycle food waste, the district’s residents are already sending close to 50% less waste to landfill than other parts of Gloucestershire.

Paper, card and carton recycling in recycling boxes has gone up by nearly 10% and green wheelie-bins are now 6% fuller. The overall recycling rate has gone from 31%   to just short of 60% and that’s without including garden waste recycling. Incorporating garden waste into the figures sends it to well over 60%.

At the same time the total amount of rubbish and recycling produced by households has dropped by 16%, with 7,835 tonnes collected over the three-month period of November 2016 to January 2017 from the district’s homes, compared to 9,343 tonnes a year earlier – a drop of 500 tonnes a month.

“In terms of how that translates into the home, we’re putting about two kilos less of rubbish out per week per person – the equivalent of two bags of sugar each. Half of it is being recycled as food waste whilst the other kilogramme is a drop in the amount of rubbish people are putting out.”

The extra reduction in waste to landfill is attributed to several factors including garden waste being collected separately, people being more careful about waste, and the new system of wheelie-bins and coloured bags for rubbish discouraging some business users from disposing of business waste in their household waste in black bin bags.

The rollout of the new service to every home in the district inevitably saw some disruption. Between November and January 6,652 of the 1.3 million scheduled waste and recycling collections were missed – although this represented only half of one per cent of all collections.

“At the start of the new service we experienced a few teething problems as you would expect when trying to change the habits of over 116,000 people and introducing 26,000 new collections each week. However, as you can see from the figures, these were thankfully very low and sorted out within a few weeks. We’d like to thank everyone for doing their bit, and making a huge collective impact, and thank anyone who experienced disruption for their patience. In a few months’ time when garden waste figures are added, the recycling rate will be even higher and possibly one of the best in the country. We’re really grateful to everyone for taking part and making it an incredible success!” 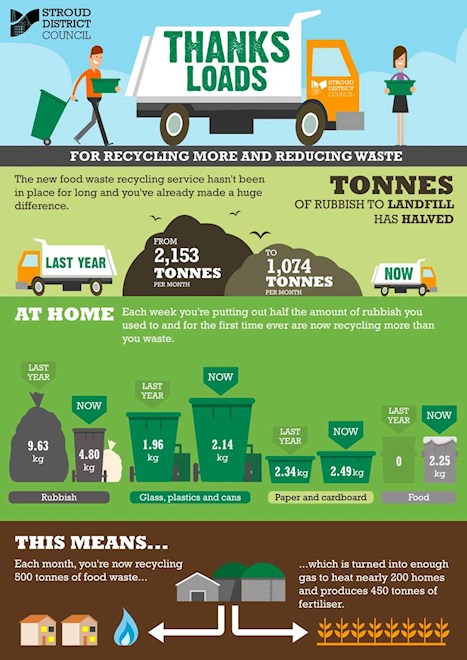