As temperatures rise with better weather, dog owners have been warned by Stroud District Council Animal Welfare Officers that they will take a hard line over dogs left in hot vehicles after a Spitz was trapped inside a car where the mercury had soared to well over 30 degrees centigrade.

The black, thick-coated German Spitz-type dog was left in its owners’ car for more than an hour in a Stroud town car park and when SDC staff arrived, the temperature recorded inside the car rose to a staggering 32.5C.

That was the second incident of the day – another thick-coated breed, an Akita, was panting heavily when it was left inside a car in Merrywalks multi-storey car park earlier on. In both instances, police were called in by SDC to free the dogs but the owners arrived back just in time to unlock their vehicles. Owners of both dogs were cautioned.

“People think it’s not going to happen to them,” said Alex Myrie, SDC Animal Welfare Officer. “And when it does happen, they say they were longer than they thought, or they’d taken them for a walk before they went shopping – actually after a walk, a dog will usually be hotter too.”

She warned that anyone who leaves a dog in a hot car is very likely to be issued with an on-the-spot improvement notice under Section 9 of the Animal Welfare Act 2006, by failing to provide an animal with a suitable environment and to protect it from pain, injury, suffering or distress. That will be entered on an owner’s record and if they do it again, is very likely to lead to a prosecution in court.

In previous animal welfare roles, both have attended scenes where dogs have died because they were trapped inside a hot car and they are concerned that as the weather takes a turn for the better, some dogs may suffer. They said leaving windows ajar is not enough – in both cases today, the thermometers were put through windows which had been left slightly open.

“The Spitz was in a car where the temperature was 27.5C in the shade and 32.5C in the sun,” said Alex. “The dog had a car harness on and although the owner had parked in the shade, the angle of the sun had changed and the car had heated up. The ticket in the car was for three hours of parking.”

That dog had been in the car for just over an hour.

The dog in the Merrywalks multi-storey car park had been inside the car since 9.15am and the temperature had risen to 20.1C by 10.15am. Alex was concerned for the dog’s welfare by 10am.

“It was panting very heavily and when the owner came back, we gave it a big drink of water,” said Alex.

Councillor Simon Pickering, SDC Environment Committee chair said: “I am appalled, saddened and genuinely shocked that people are leaving dogs in cars when the sun is out,  cars  are effectively mobile greenhouses.  None us would leave a child in a car in these conditions,  so why dogs?” I would  urge dog owners to put themselves in their dogs’ position - how would they feel after being locked in car in the sun for several hours?”

Anyone who sees a dog in a hot car and fears for their safety should call police on 101. 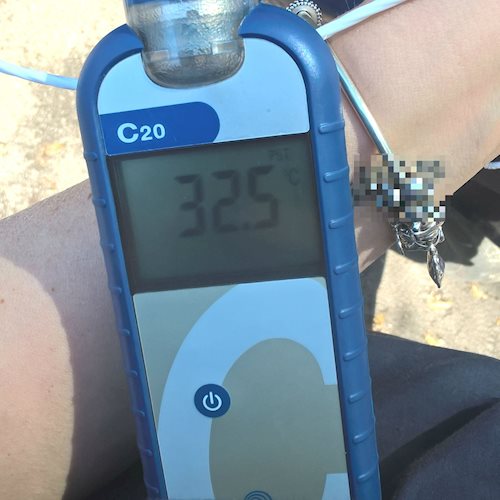 This temperature was recorded inside a car with a dog in it in Stroud on April 18, 2018.