If you’re already missing the excitement of cheering on the Cherry and Whites why not replace your energy in a game of rugby that anyone can join?

And if you thought your days of playing competitive sport were over, think again.

Gloucester Rugby and Stroud District Council have teamed up for an exciting new take on the oval ball game – and it’s a game that everyone can play.

This form of the game is ‘no contact’ and all ages, abilities, and genders can play.

"It suits all levels of fitness, is great for people looking to get a bit fitter, and is proving extremely popular up and down the country. It’s a great way to get fitter and make new friends. Why not give it a go?" said Councillor Steve Lydon, who helped set up the sessions.

“One of Stroud District Council’s key objectives is to promote health and wellbeing for everyone,” said Community Services and Licensing Committee Chair Councillor Mattie Ross. “Walking sport sessions are inclusive and reach people who might think that sports activity is not for them.

“Walking sports provide a wide variety of health benefits, such as an improvement in general health, balance, enhancing psychological wellbeing and reducing stress levels,” she added.

This format of games is very accessible and is also used for injury rehabilitation and for those of any age who don’t feel suited to a full pace game.

To find out more, call the centre on 01453 766 771 or call in. Stratford Park Leisure Centre is on Facebook at facebook/eaStratfordPark, on Twitter @eaStratfordPark and at www.everyoneactive.com 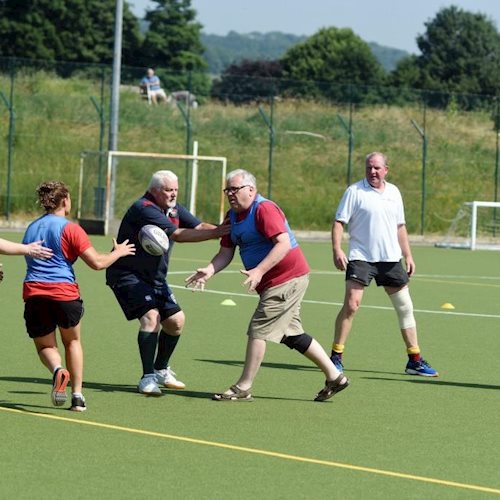