This fire cost a construction firm thousands of pounds in court

When Stroud District Council Environmental Protection Officers saw an illegal bonfire polluting the air they warned the building firm responsible – but it was lit again the next day.

JF Building Services (UK) Limited, based in Cheltenham, pleaded guilty to two environmental offences in relation to the illegal burning of waste at Tunley.

Officers from Stroud District Council’s Environmental Protection team witnessed the burning of construction waste, including wood, plastics, cables and hosing, on a bonfire at Tunley on 7th October 2019, resulting in black smoke affecting the surrounding area.

Despite officers immediately advising the company of the commission of the offences, another bonfire of similar materials at the site was witnessed on the following day.

“This should serve as a salutary lesson to companies tempted to cut corners by burning waste,” said Stroud District Council’s Environmental Protection Manager, Dave Jackson, after the hearing on Monday 3rd February.

“This company wilfully ignored warnings to cease this practice and, as a consequence, has paid the penalty. Companies tempted to irresponsibly dispose of waste should understand that Stroud District Council will act to robustly enforce waste legislation.”

The burning of commercial waste is strictly controlled and can be an offence unless carried out under an Environmental Permit or through a formal exemption.

The emission of dark smoke from bonfires on industrial or trade premises also constitutes an offence under the Clean Air Act 1993. Waste bonfires often contain materials which, when burnt, give off particularly unpleasant smoke and fumes which can be both distressing and potentially harmful to people nearby, particularly those with respiratory problems.

“Anyone who lights illegal bonfires to get rid of waste flies in the face of this and is committing an offence which we take very seriously.

“Our officers acted quickly and the sentence and costs send a very clear message to offenders.”

If you see dark smoke from a bonfire at a commercial site, please call SDC’s Environmental Health Service as soon as possible on 01453 754 478 or environmental.health@stroud.gov.uk. 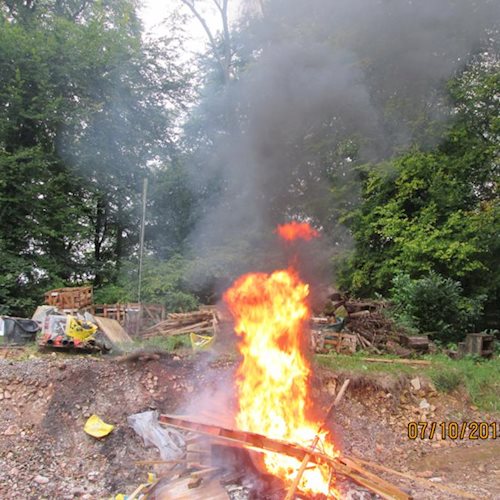