Stroud District Council has strengthened its stance on climate change to ensure the district is carbon neutral in just 11 years time.

Last night the council’s Environment Committee resolved to ask for endorsement of action on the ‘climate emergency’ announced by SDC administration leaders last month, and hit a carbon neutral target by 2030.

The motion put forward by Councillor Simon Pickering (Green, Slade) and seconded by Councillor George Butcher (Liberal Democrat, Wotton-under-Edge) urges the council to be a key player in helping the community as a whole bring down carbon emissions.

It was voted through in front of a packed public gallery in the council’s Ebley Mill HQ chamber.

The council was named by Defra this week as the best performing recycler in the South West with residents throwing away the least to landfill in England, and this resolution strengthens the council’s commitment to tackling climate change.

“It was great to see so many people turn out on a cold, dark evening to support the council,” said Environment Committee Chair Councillor Simon Pickering after the meeting.
“With cross party support for the motion I would like to think we can cut through any political blockages. To turn word into action Council will need strong support from citizens, business, charities and public bodies.”

The motion – Achieving Stroud District Carbon Neutral 2030 Commitment – was agreed in principle with some changes to ensure a business case for dealing with climate change is developed as part of the budget setting process.
“I am glad that the amended motion was passed last night because it meant we were able to gain unanimous cross party support. When the motion comes back to council at a later stage it should now get a smooth passage in debate,” Councillor Denney said after the meeting.
The Environment Committee resolved “To ask Stroud District Council to endorse the ‘Climate Emergency’ announced by the administration on 16 November 2018 and pledge to do everything within the Council’s power to make Stroud District carbon neutral by 2030.”

Strategy and Resources Committee will be asked to consider setting aside initial funds via the normal budgeting process in order to fund the scoping and delivery of the “Stroud Carbon Neutral 2030 Commitment.”

That committee will also be asked to approve a plan of action with clear targets and transparent reporting, to develop District-wide contributions to complement national contributions in line with the Paris Agreement to limit global warming to 1.5C.

It will also be asked to approve several other recommendations:
• Include planning and support in the District for adaptation to the climate change that is already happening.
• To develop a strategy for Stroud District Council to play a leadership role in promoting community, public and business partnerships for this Carbon Neutral 2030 Commitment throughout the District, County and region.
• To work with partner bodies across the county to ensure that the climate emergency is adequately reflected in the development and implementation of all county wide strategies and plans, including Gloucestershire 2050, the Gloucestershire Industrial Strategy, Gloucestershire Energy Strategy and Gloucestershire Transport Plans.
• To investigate all possible sources of external funding and match funding to support this commitment.
• To work with key partner organisations within the County and region to secure external funding.
• To report back on an annual basis to Council on progress made.

Councillor Butcher added: “It was good to see so many people at Environment Committee – I don’t think I have seen a meeting with so many members of the public in attendance. It was wonderful to get cross-party support but we now need to make sure we can turn words in to actions.” 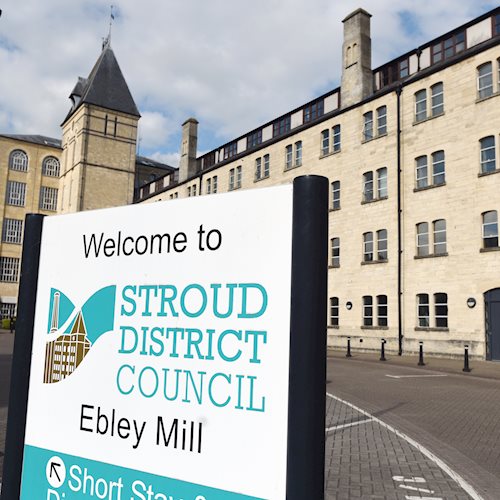