Our new electric road sweeper has a name!

The district’s electric road sweeper has a name – thanks to Stroud school pupils.

Cllr Cornell said it was a tough decision: “We had some strong entries, and Electric Gleams was a close second, but we felt Tidy Tim summed up exactly what this vehicle will achieve.”

The entry came from the Year Three class at Rosary School in Stroud.

Miss Pollard, teacher of this creative Year 3 class, spent a little while thinking of names together and came up with several options. 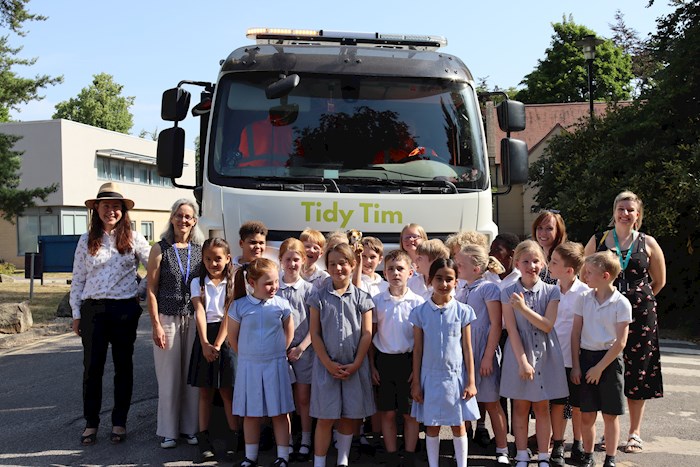 One of the new Council Plan’s top priorities is protecting our environment and leading the district to carbon neutrality in 2030. As part of the Council’s 2030 plans, the new road sweeper will save the council more than eight tonnes of carbon per year.  That is the equivalent of nearly 30 flights from Heathrow to Malaga.

SDC Environment Committee Chair, Chloe Turner, said the new vehicle has already been a welcome sight on our roads: “We already have eight Council owned EVs and five hybrids in our fleet.  We are constantly trying to find new ways of reducing our carbon footprint and working with Ubico to expand our extended fleet is a very simple win,” she said.

The vehicle is being run by council’s service provider Ubico, which has been working hard towards the Council’s 2030 agenda.

Head of Fleet Operations for Ubico, Ian Bourton, said the vehicle is being well received:

“The vehicle, and its driver, are both being well received on their rounds.  This is an exciting time for Ubico and we are committed to reducing the CO2 in the atmosphere and improving the local air quality for our residents.”