Electricity instead of diesel could power refuse collection vehicles in future, following a trial of one of the country’s first conversions – from a company based in our district.

The demonstration vehicle provided by Refuse Vehicle Solution (RVS), based in Cam, was converted from a diesel-powered vehicle by exchanging the drivetrain and creating a 100% electric power source.

It is one of the first fully electric conversions in the UK, and the bin lifting mechanism is powered by electricity too.

The technology opens up the possibility of converting the existing fleet to electricity in future. SDC Neighbourhood Wardens already use a fleet of electric and hybrid vehicles to serve our 53,000 households and 2,500 businesses.

One of Stroud District Council’s five main corporate priorities is protecting the environment, and it is one of the best performing waste collection authorities in England, according to Defra figures.

“The council is carbon neutral and is aiming for the whole district to become carbon neutral by 2030, and this is just one of many ways we can cut emissions and set an example too,” said SDC Leader Doina Cornell.

“I am particularly pleased to see a local firm leading the way in this growing sector too.”

SDC Environment Committee Chair Simon Pickering added: “While we must do everything we can to reduce the amount of rubbish we dispose of, and cut our carbon miles, electric vehicles like this will be needed in future. I look forward to exploring this option further.”

The vehicle was used on rounds in Stonehouse, Wotton-under-Edge and Upton St Leonards – an overnight charge was all that was needed to complete a round. On the Stonehouse round it covered 55km and performed 1,054 bin lifts.

RVS Managing Director Spencer Law said: “Stroud District Council is one of many councils across the UK which have completed successful trials of our e-One electric re-powering solution, which converts existing diesel refuse vehicles into electric vehicles. We are thrilled that Stroud District Council is trialling this technology and we hope to support it in achieving its target to make the whole district carbon neutral by 2030.”

Data from the rounds is being used to make comprehensive assessments which will help in making a move to electric vehicles for the fleet operated by Ubico for Stroud District Council.

The Stroud district’s unique geography means waste and recycling vehicles must negotiate steep climbs, narrow lanes, and long rounds – all this will be taken in to account when deciding how to find the most appropriate way forward. 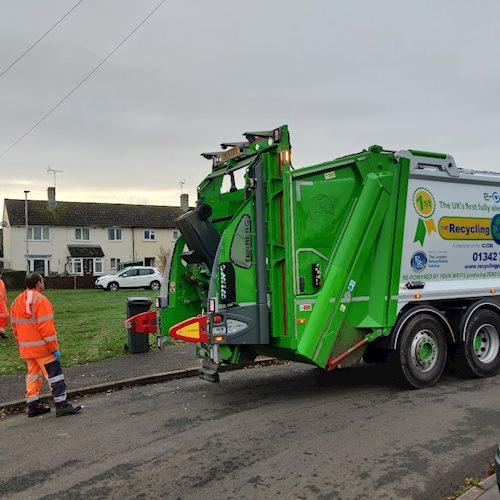