Councils have joined forces to replace a failing bridge and provide a smooth and safe path for cyclists and pedestrians for decades to come.

The old bridge over the well-used Nailsworth-Dudbridge-Stroud path had fallen into disrepair and faced imminent closure because it was a safety risk.

Investigations suggested that the Newman Hender bridge at Inchbrook has no recorded owner, so Stroud District Council and Gloucestershire County Council decided action was needed, or it would face closure.

Engineers for the county council developed a design that retains the look and feel of the old Victorian bridge while installing a fibreglass reinforced plastic deck which will last for many years.

The scheme presented many challenges including repairing a privately-owned wall which was in danger of collapse, while keeping access open to nearby homes and for users of the path on a temporary diversion.

The works are part of both councils’ commitment to upgrade the path and make it easier and safer for cyclists and pedestrians to use.

Almost three years ago, two lengthy sections of the trail were resurfaced with a recycled tyre product, and more recently a short section at Woodchester has been widened and the bridge between Birds Crossing and Paul’s Rise has been repaired by the addition of new bearer beams, deck and handrails. Ramps have been installed and widened north of Woodchester too, while work has been recently finished to improve access on and off the trail at Dunkirk Mill.

GCC contractors did the work, part or fully funded by Stroud District Council, and the rubber crumb surfacing work was also completed in conjunction with the Gloucestershire Wildlife Trust’s Wild Towns project and the Stroud Valleys Project.

Surfacing works along the trail cost more than £250,000 over two years, jointly funded by GCC, SDC and Gloucestershire Wildlife Trust.

Community Infrastructure Levy is a charge paid to the planning authority, the district council, by property developers, based on the size and scale of their development, and which the council may use on any community improvements.

It provides a fair and transparent means for ensuring that development contributes to the cost of the infrastructure it will ultimately rely on, such as schools, social infrastructure, flood risk works, transport and roads.

The funding collected through CIL can be used towards providing the basic physical and organisational structures and facilities needed for the operation of a sustainable society.  It will help provide for any additional demand placed on the local environment and services created by new growth.

SDC Environment Community Chair Chloe Turner said: “To invest in cycling and walking initiatives throughout the district contributes to the aims of the Council Plan and CN2030 agenda. We are committed to enabling active travel and this is a great example of that.”

Gloucestershire County Council member for Nailsworth, and SDC chair Steve Robinson said: “This is a well-loved and well-used path that is valued greatly by the community. I am really pleased to see joint working between GCC and SDC to ensure the bridge was replaced and the track improved.”

Amberley and Woodchester ward councillor Ashley Smith added: “The new bridge means that cyclists and walkers will continue to have a direct, high quality travel route that can be enjoyed for many years to come.”

Cllr David Gray, Cabinet member for the environment at Gloucestershire County Council, said: “We are committed to encouraging active travel, such as walking and cycling, to help us create a Greener Gloucestershire.

“I am delighted that we have been able to work with Stroud District Council to save this bridge from closure and improve facilities for residents.” 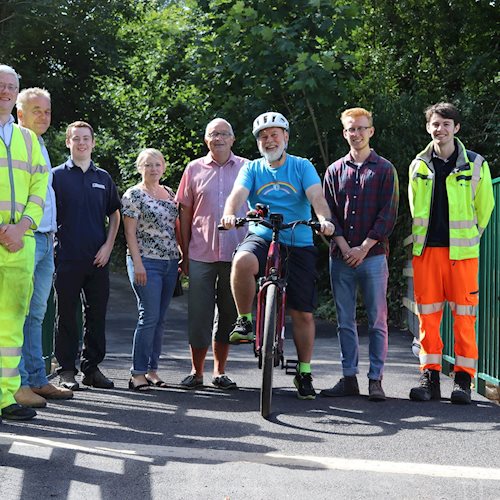