Two shopping trolleys and a traffic cone were among the debris dredged up from Stratford Park lake as part of a Stroud District Council-led plan to restore its water quality and wildlife.

The lake has been deteriorating in water quality for several years, despite the fact that it is fed by the pristine Stratford Park spring. The size of some of the fish and population numbers has outgrown the space, and over the years large quantities of bread thrown to ducks and swans has sunk to the bottom and rotted. This is then stirred up by bottom feeding fish.

As a result the water clarity has diminished, and all the plants and the wildlife they support have largely disappeared. In the hot summer months the lake sometimes runs out of oxygen and has to be artificially aerated to keep the fish healthy.

The Environment Agency, Stroud & District Angling Club and Stroud Town Council have all approved the restoration plan, the first stage of which was to safely remove most of the current fish population and re-home them in other waters managed by the angling club.

The next stage will be to lower the level of the pond, again under the guidance of the Environment Agency, so that any remaining fish will be protected.

Improvements to the lake will include improving the wildlife value by re-grading the banks, then it will be re-filled with spring water, and re-planted with a wide range of aquatic plants.

Finally the lake will be re-stocked with mid water feeding fish more suited to its size and ecosystem, and we will work closely with the angling club to make it more suitable for junior anglers.

“Its great that this once stunning clear water lake  is being restored  to a  balanced ecosystem. It is the build-up of rotting bread, fish bait and silt over the generations has led to this decline and artificially high population of wild ducks. I hope in these in more enlightened times, once restored, future generations won’t repeat these mistakes. After all you wouldn’t throw bread into your bath, leave it to rot and then expect your children to sit in it.” 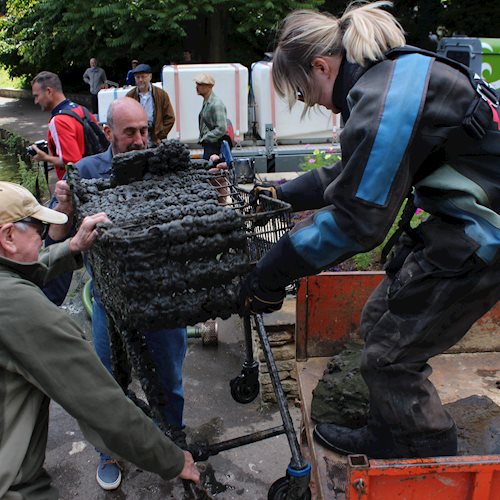 One of the shopping trolleys found in Stratford Park pond 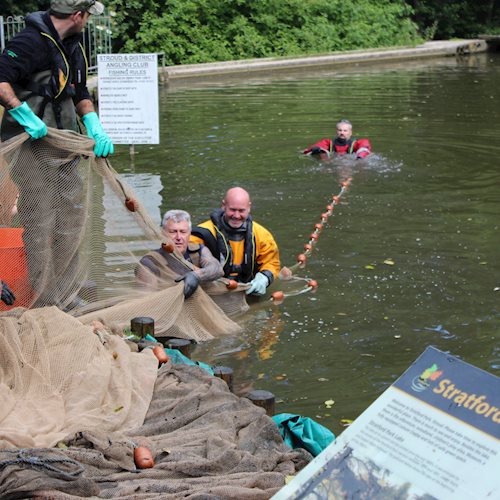