At next week’s Strategy and Resources Committee meeting (Thursday, November 24), members will consider a report asking them to reaffirm their support for the canal  project and allocate up to £1million from the capital projects reserve, as part of a plan to bridge a funding gap caused by inflationary cost increases.

Work is progressing at pace on the Cotswold Canals Connected project, to link the restored Stroud - Stonehouse section with the national inland waterway network at Saul Junction.  The project involves hundreds of volunteers and is expected to bring huge benefits to the local area, for the environment, economy, leisure, community, health and heritage.

The canal restoration aligns with all three priorities in The Council Plan, which is the Council’s vision for the district up to 2026: environment and climate change, community resilience and wellbeing, and economy, recovery and regeneration.

Due to inflationary pressures, project costs are forecast to rise, so the council’s proposed contribution would form part of a wider plan to bridge the funding gap. Positive progress is being made to secure the additional funds through a combination of fundraising, charitable grants, legacies, donations, public funds and additional funds from canal project partners.

Most of the funding is needed for increased engineering costs which have risen since a successful £8.9million bid was made to the National Lottery Heritage Fund in 2018. The cost of materials, and inflation due to global issues beyond the council’s control have largely contributed to a funding gap.

The Council has been committed to the project as lead development partner with Cotswold Canals Trust since 2008. The canal under restoration, known as the Stroudwater Navigation, was formally abandoned by an Act of Parliament in 1954 and links up with the Thames and Severn Canal at Wallbridge in Stroud.

“The Cotswold Canals Connected project connects communities, improves wellbeing, and benefits the environment,” said Council Leader Catherine Braun who chairs the committee. “Any money allocated would be from a reserve set aside for big capital projects such as this and will not impact on other council services.”

Deputy Council Leader Natalie Bennett added: “So much has been achieved for the canal and the communities along it since Stroud District Council teamed up with Cotswold Canals Trust, and the benefits it has had and continues to have are clear.”

For more information on the canal restoration, visit www.cotswoldcanalsconnected.org/ 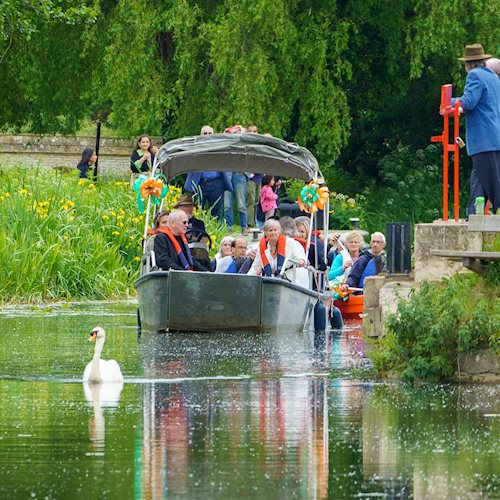 The canal has been restored from Stroud to Stonehouse so far. Picture by Matthew Bigwood