Like other parts of Gloucestershire, the Stroud Valleys suffered extensive flooding during the summer of 2007.

Every year since has seen flooding in some parts of the Stroud Valleys, including most recently Chalford on the middle Frome, and Bridgend and Eastington on the lower Frome.

Of particular concern to residents and the District Council is the designation by the EA of the Slad Valley as at risk of destructive flash flooding, of a similar type to the event that destroyed parts of Boscastle in Cornwall.

After the flooding in 2007, community flood action groups were established in the Slad and Painswick Valleys and also the lower Frome and subsequently on the Middle Frome at Chalford. They have campaigned for better protection for residents and properties from flooding, but over the years, communities and authorities have realised that the Upper River Frome and its tributaries are not suited to hard engineered solutions. This is in part due to the physical nature of the catchment and the distribution of the properties at risk, but also due to the heritage and aesthetic value of the Stroud valleys. 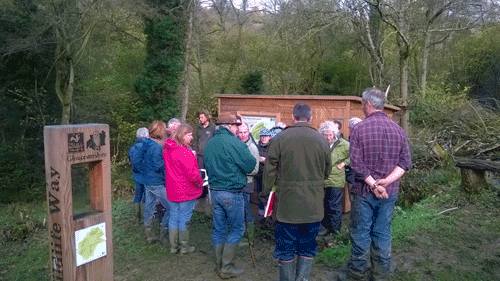 In 2012, the Environment Agency commissioned a report into the feasibility and potential benefits of implementing Natural Flood Management (also called Rural Sustainable Drainage) (RSuDS) throughout the catchment of the Frome and associated tributaries.

Acting on the findings of the study, the Severn and Wye Regional Flood and Coastal Committee (RFCC) agreed to fund a project officer to implement and promote rural sustainable drainage in the Frome catchment. A formal partnership between Gloucestershire County Council, The Environment Agency, the RFCC and Stroud District Council was established to implement the work, and under a collaborative agreement, Stroud District Council agreed to employ the project officer for three years.

To implement the approach and achieve real reductions in flood risk will require extensive partnership working between communities, land managers and farmers. The project is seeking help and assistance from owners of riparian woodland and agricultural land to implement Rural Sustainable Drainage measures to help reduce flood risk for down stream communities.